Surprisingly until now, there are only few Penangnites who knows about Khoo Kongsi. The location which hidden among shop houses clusters in Canon Street may well explain it. You may require more than just a map for a location guide to Khoo Kongsifor first time visit.

In order to get there, you need to walk pass along an old century of shop houses where the main entrance will be located along the alley. 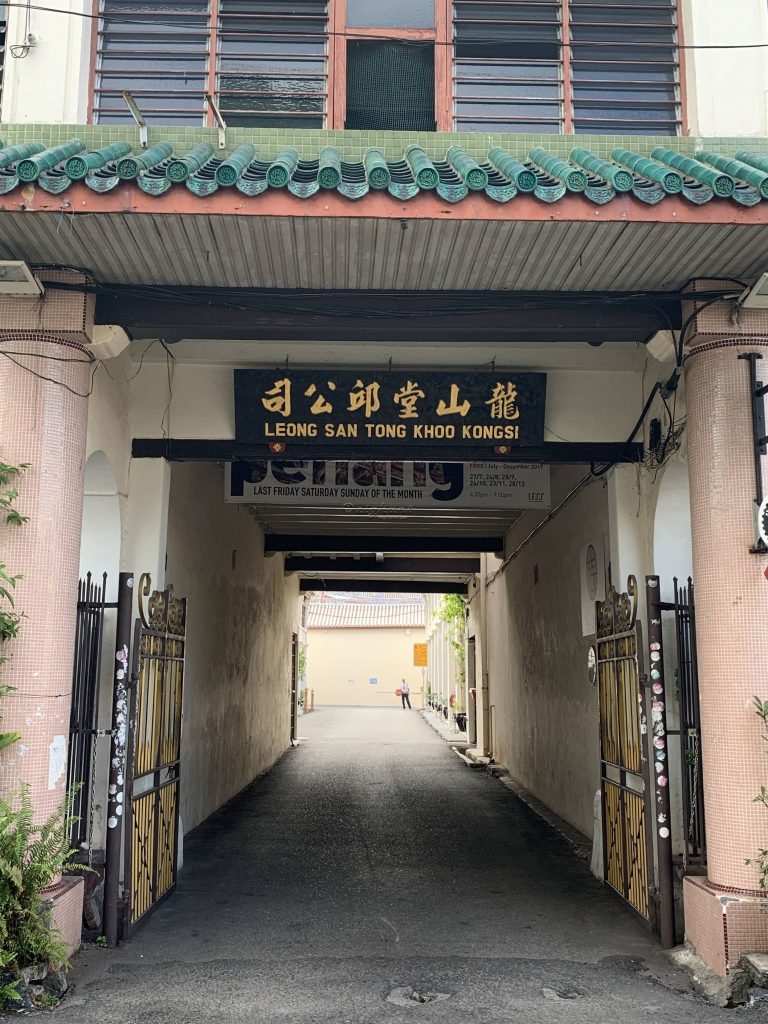 Recognised as the oldest clan temple in South East Asia where the Khoo Kongsi belongs to the Khoo clan together with the big five major surnames namely (Cheah, Lim, Tan and Yeoh) or also known as Goh Tai Seh. Together, it forms a large Hokkien community in Penang.

Back those early days of time in Penang, these 5 big clans were the major influence societies. You will notice their footprints establishment if you had taken a stroll along from Beach Street to Chulia Street.

A lot of people had mistakenly assuming Chinese community that had Khoo surname are descendant of Leong San Tong Khoo Kongsi. In reality, it only constitute the facts they are the Khoos from Sin Kang Village, Sam Toh County, Hai Teng District, Chiang Chew Prefecture and Hokkien Province in China. The name has been then changed to Sin Aun Village, China where majority occupy by Khoos who shares the same ancestors with Penang’s Khoo Kongsi clansmen, namely Chian Eng Kong.

According to history, you will notice that the original ancestor of Khoo clan does not have the surname of Khoo. In fact, it was from Chan clan. It also mention Chian Eng Kong inherit a large sum of assets from Khoo family and the subsequent generations accept him as their forefather.

Chian Eng Kong’s ancestors relocate to Chuan Chew Prefecture from Henan Province at the end of the Tang Dynasty period. After that, the next generation of Chian Eng Kong relocate to Sin Kang Village. From there, it becomes a large Khoo clan in Sin Kang where their offspring prospered and flourished.

The Khoo clan had over of 600 years of history spanning with 27 generations beginning from Chian Eng Kong. In 20th century, the members of the Khoo have spread all over South East Asia and settle in a land far away from their hometown. Today, you will find the Khoo had set footprint in Burma, Indonesia, Malaysia, Philippines, Singapore, Taiwan and Thailand.

The Khoos migrated mainly due for business nature or to escape from turmoil back home.

The Penang Island becomes their favorite choice of settling down. The Khoos presence in Penang were originate from Sin Kang Village and some who came from Kedah and Malacca.

The Khoos clan later realize they need a place for ancestral, deity worship and other functions like wedding ceremony as their community grew in Penang. Finally, 102 Khoo clansmen manage to raise a sum of 528 dollars and establish “Ee Kok Tong” on the 8th day of 5th moon in 1835.

The Khoo clan later became the most powerful surname-based among Chinese especially the Hokkien community in late 19th century in Penang.

In 1894, the Leong San Thong construction was commissioned to master craftsmen from Southern Fujian. It took them 8 years of work to come up with impressive appearance design.

Unfortunately the new Leong San Tong mysteriously caught fire and razed to the ground during Chinese New Year eve at the same year.

In 1902, the Khoo Kongsi press on to rebuild the clan temple after the fatal fire incident. This well took them another 4 years. There were 2 construction projects with each spanning 13 years long and required more than 100,000 dollars to complete Leong San Tong by 1906.

1906 – Board Of Trustees Group Photograph Upon Completion © Museum Photograph

However, some parts of Leong San Tong were damaged during the 2nd World War and it still looked very much the same as what you can see today. After the war, a huge restoration project was on the way in 1958.

Khoo Kongsi then had invited several experts from China and India to restore much of the building structure at a cost of RM 4.2 million between 1999 and 2001. Education is traditionally well-being respected in Chinese society. In 1907, Khoo Kongsi had set up a school in Penang (Sin Kang Primary School) and provide free education to the children of Khoo clansmen.

Early education was held in the newly completed ancestral hall and after that was temporarily relocated to a more spacious establishment to cope with the increase of demand.

After the 2nd world war, a new school was built in Thean Teik Estate (Bandar Baru, Air Itam) and open for public in 1954 then incorporated into national education system in 1958.

Additionally, Khoo Kongsi does provide education fund to support the young clansmen to pursue for further education whether locally or internationally. A celebration will be held for those who succeed and their academic achievements will be inscribed on plaques which hung in the hall for recognition.

Up to date, Khoo Kongsi own more than 200 residential and shop houses in George Town and Thean Teik Estate alone as well as other properties like landed and plantations elsewhere.

This prove Khoo Kongsi is one of the richest Chinese clan in Northern Malaysia (Penang). Mainly, the income yield from agricultural plantation (communal land) and use for building maintenance as well as ancestral worship.

Khoo Kongsi also makes use of estate investments income for taking care other welfare such as fellow clansmen education and priority will be given to purchase new properties.

Originally, the “24 clan dwellings” within Khoo Kongsi building were once inhabited by Khoo families whom originate from Sin Kang Village but later on slowly rent out to other clansmen after 2nd World War.

Besides that, the Khoo Kongsi also offered funds through quasi-banking method to its clansmen. However, the services came to an end in 1969. They also provides some old age relief fund to clansmen whom deserve it.

Normally, the Khoo clan law includes both written and unwritten rules. Usually, the clansmen were prohibited from showing disrespect to the elderly, behave rudely, steal or any other forms that may bring humiliation to the ancestors and the clan.

According to the clan practice, they are strictly prohibited from marrying clansmen with the Chan surname as their ancestors were came from the Chan family. Well those were the times.

Moreover, those with the same surname are advised not to marry each other according to the Chinese tradition society rules.

The Leong San Tong consists of 3 parts which were:-

b)      Double-storey main building (connected by a grand staircase) Its architectural influences reflects the temple style in Southern Fujian with a prayer pavilion and a main building and that of a local bungalow with front porch.

A mark of ingenious artistic legacy which left behind the master craftsmen from Southern Fujian at the end of the Qing Dynasty. It stands 1.2 meters above the ground and you will notice there is a “Stone Of The Royal Way” from the middle of it give a sense of grandeur at the entrance of the clan house. You can see there is a stone resembling the “Royal Way” for the Emperor in ancient times on the right of the terrace grand stair. There is a round “FU” character shape representing the arrival of 5 different types of luck and fortune.

You will notice a plaque with “Cheng Soon Keong” written on it right above the middle staircase just before entering the halls. It shows that there is a similar temple presence in the Sin Kang Siah, China village. The largest plaque on the architecture would be “Leong San Tong” and it’s not just signifies the name of the Kongsi but also the origin of the Khoos from Sin Kang Village.

The kitchen is the typical of the Southern Fujian styled side-wing. It has an air-well, and its gable has a rounded end. A corridor connects it with the main hall.

Murals At The Rear Corridor

Now, you will notice there are a lot of simple traditional Chinese mural brush paintings located at the back corridor of the temple.

Most of the paintings theme are used for teaching, discussion and even for the Khoo clan future plans.

Three Visits To The Cottage © Zighunt

The mural at the rear corridor tells the story of the “Three Visits To The Cottage”, an episode in The Romance Of The Three Kingdoms.

The extraordinary filial piety of Shun which touched even Heaven. Elephants and birds came to help in his farming. The couplets that go with the painting mean: “to observe the two spheres regulating yin and yang between Heaven and Earth, to play a game of chess reflecting on the strategies of the past and the present”.

The nine men in the painting look calm and relaxed – they are either observing the Twin Fish Chart, or playing a game of chess. They have mastered the vicissitude around them with a kind of easiness. The Twin Fish symbolizes the Chinese belief of “Yin” and “Yang”

The artist signed himself as “Hermit Yeoh Boon Ngah”.

This painting pays tribute to the clan leaders of Khoo Kongsi, whose insights into the ways of changes in a highly competitive society have steered Khoo Kongsi to the top.

The two paintings flanking “Hundred Sons and Thousand Grandsons” are thematically a pair. The one on the right features a fisherman and a woodsman, while the one on the left features a farmer and a child riding and reading on the back of an ox, hence the title “Fisherman, Woodsman, Farmer and Scholar”.

Peasants have to work hard to be self-sustained, while cultivating good morality and improving their temperament through reading. These are the values revered in a traditional agricultural society. This painting epitomizes the wish of the Chinese society, especially for big families. A house filled with off springs is considered a blessing. It is also a wish for the Khoo clan to flourish since the number of offspring illustrates the power of the clan. The mural of these Legendary Immortals in Khoo depicts the eight in a leisurely mood. The mural, painted by an artist surname Tan from “Tong Aun”, depicts a different style from that of Yeoh Boon Ngah.

The couplets flanking the painting mean “loyal officials and dutiful sons are first-class human beings”, while “farming and studying are the two things that matter most”.

In fact, the Khoo had bring much of the influence and development towards Penang society. You can visit the Khoo Kongsi museum to know more about their lifestyle and cultural during 19th century.